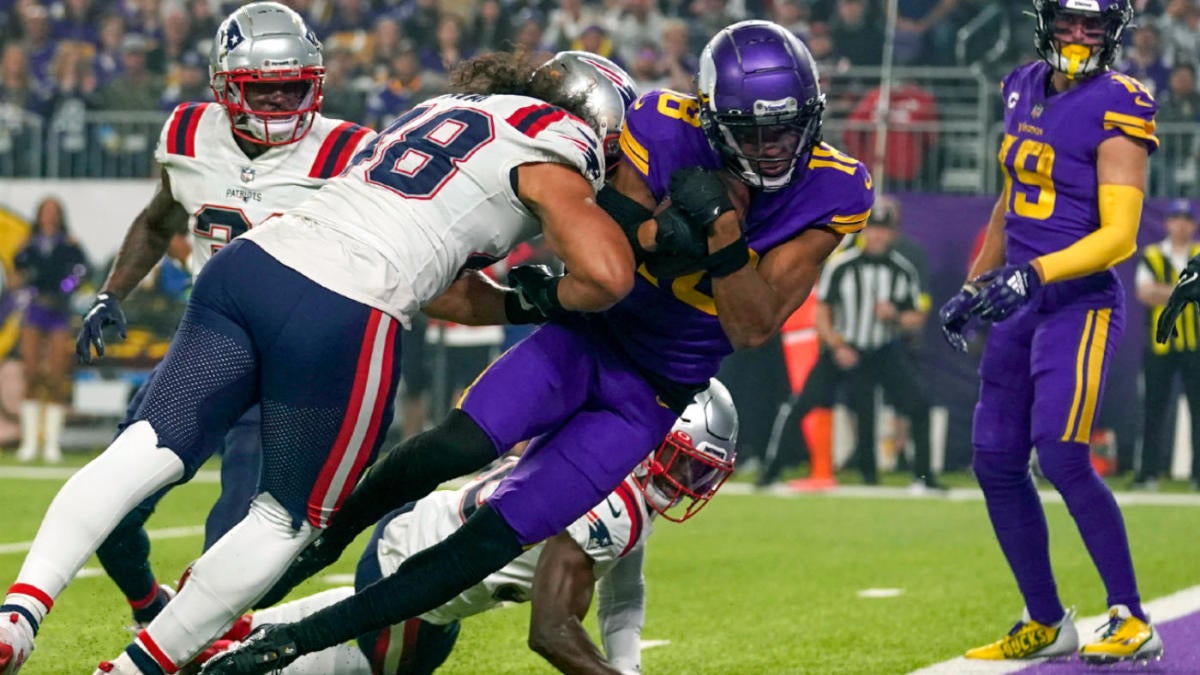 The Vikings moved to 9-2 on the season after taking out the Patriots in the final game of the NFL’s Thanksgiving triple-header, 33-26.

After being held to field goals in Week 11, both offenses wasted no time getting into the end zone to start this game. Minnesota needed just eight plays to travel 80 yards to score a touchdown on the opening drive of the night. Then, New England matched that score with one of its own as Mac Jones connected with Nelson Agholor for a 34-yard touchdown. From there, these offenses continued to match in the first half and found them tied at 16 at the break.

New England opened the final half with a 75-yard touchdown drive to go up by seven. It didn’t take long for Minnesota to bring the game back even as Kene Nwangwu ran a 97-yard kickoff return for a touchdown.

It was 26-all at the start of the fourth quarter, and it was at that point that the Vikings started to pull away. A penalty on New England for running into the kicker gave Minnesota new life on a third-and-4 point and they cashed in. Two plays after the penalty, Cousins ​​completed a 36-yard pass to Justin Jefferson and then a 15-yard touchdown to Adam Thielen to take the lead and hold on.

Kirk Cousins ​​finished 30-of-37 for 299 yards with three TDs and an interception. Justin Jefferson was his go-to target and the star wideout had 9 catches for 139 yards and a touchdown, breaking a record held by Randy Moss in the process. Meanwhile, Mac Jones was 28-of-39 for a season-high 382 yards with a pair of TDs and no interceptions.

For a more detailed breakdown of this game, check out our takeaways below.

Why the Vikings won

While there has been a story about Kirk Cousins ​​in primetime games, the Vikings quarterback was largely fine Thursday. He did have one poorly thrown interception, but other than that he was stellar for Minnesota. He could match any scoring output the Patriots fielded and could distribute the ball to seven different pass catchers. That said, Justin Jefferson was his go-to target and the star wideout continues to carry the offense. In addition to simply piling up stats, Jefferson made a number of clutch catches, including a 36-yard reception that helped set up Thielen’s fourth-quarter scoring drive.

While the defense allowed a number of plays through the air, you also have to give them credit for holding the Patriots offense to close out the game. After Minnesota took a 33-26 lead, the defense forced a three-and-out, a turnover on downs on the next possession and then kept them out of the end zone as the clock ticked down to the end of regulation.

Why the Patriots lost

New England’s struggles in the red zone continued Thursday. In this game, the Patriots finished 31st in red zone touchdown rate and went 0-3 in the red zone against the Vikings. Really, the offense relied on chunk plays from Mac Jones, which he was able to deliver as both of his passing scores were of 30-plus yards. When they knocked on the door of the end zone, however, they couldn’t get through. In fact, the Patriots had two drives where they got the ball to at least the Vikings 6-yard line and were unable to score touchdowns on either of them. Yes, there was a debatable Hunter Henry touchdown that ended up being called back, but the Patriots had multiple plays inside the 10-yard line and couldn’t find a way to push through.

Of course, you can’t talk about this loss without bringing up the special teams unit. This was a remarkably poor showing by that unit and their lackluster play directly resulted in 14 points for the Vikings. After taking the lead to start the second half with a 75-yard touchdown drive, the Patriots special teams unit immediately allowed Minnesota to tie the game again, allowing a 97-yard kickoff return for a touchdown. In the fourth quarter, they also committed a run into the kicker penalty that allowed the Vikings to score the game-winning touchdown.

This was a back and forth contest all night as these clubs picked each other up to tie the game at various points. In the early stages of the fourth quarter, the score was tied at 26 and it looked like New England would force a three-and-out and get the ball back with a chance to take the lead. However, rookie Pierre Strong ran into punter Ryan Wright as he tried to boot the ball away, which drew a flag. The five yard penalty was enough to give the Vikings a first down and keep the drive alive. Three plays later, Kirk Cousins ​​hit Adam Thielen for what turned out to be the go-ahead touchdown.

Let’s give some props to Kene Nwangwu for taking that kickoff 97-yards to the house. After New England scored on a 37-yard Hunter Henry touchdown to end the second half, it felt like the momentum shifted in the Patriots direction. Once Nwangwu ran this back, however, any positive juice the Patriots got was quickly deflated.

This was the third kickoff return for a touchdown of Nwangwu’s career.

From here, the Patriots will head back to Foxborough and gear up for another game on Thursday night as they will host the Buffalo Bills for their first meeting of the season. As for the Vikings, they will be hanging around US Bank Stadium and preparing for the New York Jets.